The Make Some Noise: Cure Kids Cancer Foundation was established by a child with cancer with one purpose in mind: to fund pediatric cancer research. To that end, the foundation serves as a vehicle to secure private funding to distribute to research facilities and promote awareness through its fund raising activities. The designation of funds to various research facilities is cancer specific and based on the foundation's annual evaluation of the latest research. 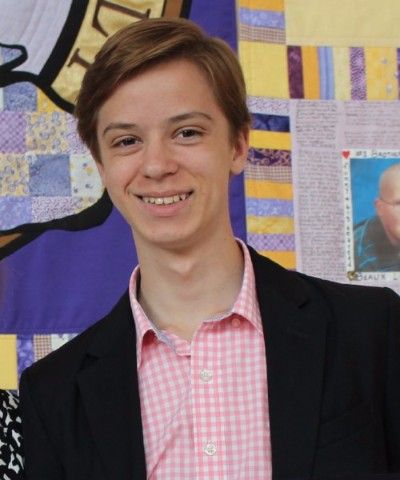 Malcolm has battled Ewing’s Sarcoma, and ensuing complications since 2008, while tackling the greater role of raising national awareness and funding the critically needed translational research to help find the cures for childhood cancers.

Malcolm Sutherland-Foggio, of New Jersey, has been battling cancer and related issues in the research lab as well as his own body since 2008. The youngest of three boys, Malcolm Sutherland-Foggio was an active healthy child until his hip began hurting in the fall of 2008.  At the age of 10, he was diagnosed with Pelvic Ewing’s Sarcoma, a highly aggressive and malignant bone tumor and began treatment within hours.  Malcolm began his journey with concern for those around him.  He immediately created and maintained a website to keep his contacts informed so they would not be afraid for him.  Malcolm felt compelled to share the story of pediatric cancer whenever he could find the opportunity.  From the very beginning of his journey, he began publicly speaking out and raising funds through the sale of wristbands, all while enduring 14 rounds of chemotherapy, surgery to remove his hip, endless side-effects, rehabilitation, and keeping up with his schoolwork.

Malcolm realized that he saw no awareness for pediatric cancer and learned that only 3 percent of cancer research funds are directed to childhood cancers, grossly inadequate to research the cures.  Half-way through his own battle, he began seeing children around him die of cancer and decided that to really "make some noise," and impact awareness and research funding, he needed to expand; and his dream to incorporate a national foundation was born. Seeing little or no awareness for children’s cancer and discovering that research dollars are inadequate to research the cures, he felt compelled to “make some noise” about it and to incorporate a foundation for pediatric cancer research funding.

Malcolm founded the Make Some Noise: Cure Kids Cancer Foundation in 2009, at age 11, to raise critically needed research funding and national awareness for pediatric cancer.  Remarkably, in the  nearly five years, since incorporating, Malcolm and foundation have so far raised over $2M to fund pediatric cancer research, and plans to raise millions more to help accelerate the cure research.  He has corporate headquarters in New Jersey and chapters in Colorado, Western New York State, and Washington State, and hopes to inspire others to start additional chapters.

Malcolm tours the country meeting with researchers and touring lab facilities, to better understand the crisis and the promise of what lays ahead in medical research.  Malcolm gives up his summer vacations to travel the country in a trailer wrapped in awareness and carrying his precious tribute quilt “The National Angel Quilt,” to honor the memories of other children who faced the same battle as he did, but died for the lack of cures. Summer of his junior year in HS, he interned in a pediatric cancer research lab for six weeks to gain more first-hand knowledge.  Malcolm is currently in college studying business, plays guitar, is an accomplished artist, is the Philanthropy Chair of his fraternity, and continues his work at Make Some Noise.